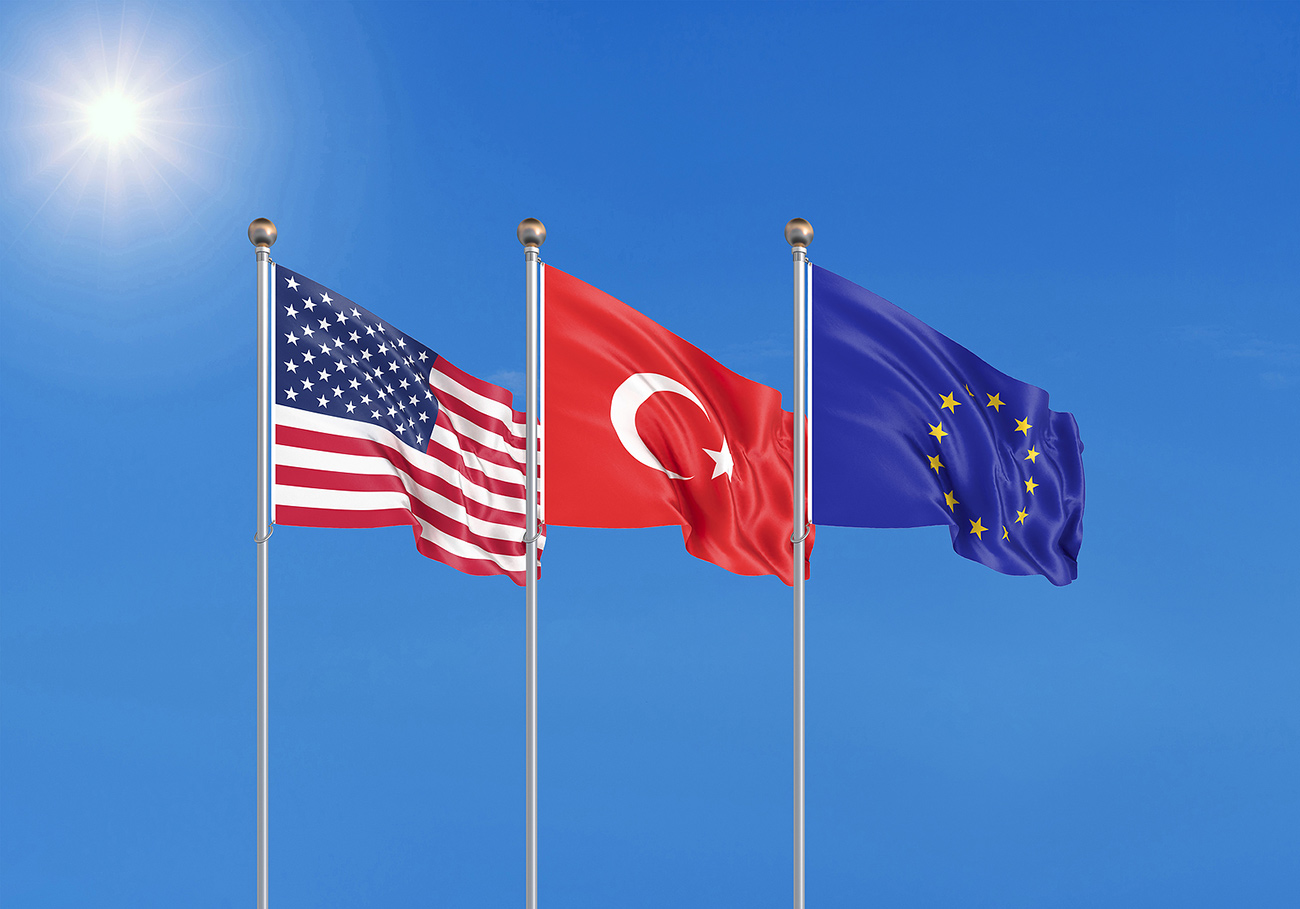 Turkey’s objections to Finland and Sweden joining NATO have put the spotlight on Ankara’s role in the alliance. Even if a compromise is found, Turkey’s relations with Europe and the US will remain fractious.

When Vladimir Putin launched his invasion of Ukraine in February, it appeared that one unexpected silver lining could be improved relations between Turkey and its allies. When the invasion began, relations were thawing after reaching a low point in 2020, when Ankara’s exploration for hydrocarbons in waters near Greece and Cyprus had led to high tensions with the EU and the US. In 2021, Turkey had wound down its exploration activities and adopted a more conciliatory foreign policy, trying to improve relations with the EU and the US, as well as with countries in the region, like the UAE, Israel, and Saudi Arabia.

The threat from Russia seemed likely to reinforce this détente and push Turkey and its Western allies closer. Ankara firmly condemned Russia’s invasion and expressed its strong support for Ukraine’s sovereignty. While Turkey did not apply sanctions to Russia, it provided Ukraine with valuable military support, in the form of its Bayraktar drones, and it facilitated talks between Russia and Ukraine. Ankara blocked Russian military ships from transiting through the Turkish straits and barred from its airspace Russian planes carrying military personnel to Syria. Western leaders stressed Turkey’s important role as a NATO ally, and there were signs of improving relations. Turkey restarted discussions with France and Italy on jointly producing an air defence system. The Biden administration moved forward with seeking Congress’ approval for the sale of missiles to Turkey, along with upgrades for Turkish F-16 fighters. Notably, French President Emmanuel Macron put forward a plan for a joint operation with Turkey and Greece to evacuate Mariupol – which was particularly striking given that France and Greece had been amongst the EU countries which had the worst relations with Turkey.

Then came Turkish President Recep Tayyip Erdogan’s statement that Turkey did not support Finland and Sweden joining NATO. Because accession to the alliance requires unanimity, the process is now on hold. Turkey has laid out a series of complaints in relation to Finnish and Swedish membership. The main one is that the two countries, but particularly Sweden, have been tolerant of the activities of the Kurdistan Workers’ Party (PKK), a group that has waged an armed insurgency against the Turkish state since the mid-1980s, and which the EU and US classify as a terrorist organisation. Ankara also accuses Sweden and Finland of tolerating the activities of supporters of exiled cleric Fethullah Gülen, which Turkey also considers to be terrorists. Then Ankara complains that Finland and Sweden imposed arms embargoes on Turkey after its 2019 military offensive in Syria against the Kurdish People’s Protection Units (YPG), a militia that Turkey sees as part of the PKK. Turkey has also been annoyed that Swedish officials have met YPG representatives. To drop its current opposition to Finnish and Swedish accession to NATO, the Turkish government wants the two countries to take a harder stance towards the PKK and its affiliates and end their arms embargoes on Turkey.

Turkey’s stance can partly be explained by domestic politics. The next election must be held before June 2023, and the government’s popularity has been falling, largely because of Turkey’s economic difficulties. The applications give Erdogan leverage, and he is unsurprisingly using them to highlight his importance and burnish his image domestically. Turkey’s stance may also be a way to extract concessions from the US on other matters. For Turkey, US military support for the Syrian Democratic Forces (SDF), of which the YPG is the largest component, has been a huge issue. The Biden administration has recently decided that its sanctions on foreign investment in Syria will not apply to areas under the control of the SDF in Syria’s north, and Ankara fears this will help to consolidate the group’s influence. Arms sales are also a consideration: Erdogan may also be calculating that by stalling, Turkey can put pressure on a sceptical Congress to approve the sale of both modernisation kits for Turkish F-16s and upgraded F-16s.

Finding a compromise that is acceptable to both Sweden and Finland but also allows Ankara to claim that its concerns have been addressed won’t be easy. A vague promise of increased vigilance against PKK activities on Swedish and Finnish soil would probably be insufficient to change Erdogan’s mind. And the Swedish and Finnish governments will probably be unwilling to offer substantive concessions, for example by endorsing Turkish operations against the PKK and its affiliates in Syria and Iraq, or by lifting restrictions on arms exports. Similarly, Washington will be unwilling to make all the concessions that Ankara seeks. The approval of the arms sales is up to Congress, and there is little sign that the US is willing to stop supporting the YPG in Syria, because it sees the group as an important line of defence against a potential revival of the Islamic State and against Iranian influence in Syria. Of course, Turkey may eventually settle for some relatively minor concessions. But there is no guarantee that a quick compromise can be found, as Erdogan may calculate that he has little to lose and can benefit more from stretching out the dispute. And it is not certain that Ankara will ultimately compromise – Turkey has long felt that its allies do not take its security concerns seriously enough and has resented Western support for the SDF. Turkey’s decision to purchase the Russian S-400 air defence system despite the (later enacted) threat of US restrictions on arms sales to Turkey shows that incurring costs is not necessarily a deterrent for Erdogan.

If no compromise can be found soon, Finland and Sweden’s accession to NATO will be delayed and relations between Turkey and its allies will suffer. There is likely to be very little sympathy for Ankara’s position, and many allies will think that Turkey’s actions are to Russia’s advantage. The recent détente will evaporate, and Turkey will become more isolated within NATO. Calls for Turkey’s status as EU candidate to be suspended are likely to grow louder in some EU and NATO governments. Some voices, both in the EU and the US, might even call for Turkey to be suspended from NATO, even though there is no mechanism for doing so. These developments would strengthen anti-Western sentiment in Turkey, and many Turks would accuse the West of double standards, pointing to how Greece blocked Macedonia’s application for NATO membership until the country changed its name to North Macedonia. The West would also have to find alternative security arrangements for Sweden and Finland outside of NATO. NATO could still take steps to strengthen Swedish and Finnish security, such as carrying out joint exercises. And the US and some EU states could extend security guarantees on a bilateral or mini-lateral basis.

Even if a compromise is eventually found, relations between Turkey and its allies will remain fractious. Most Turks continue to think that the West does not take their security concerns about the PKK seriously enough. Meanwhile Turkey’s domestic and foreign policies will continue to complicate relations with many European countries and the US. The EU and the US will keep complaining about the deterioration of democracy and the rule of law in Turkey, infuriating Ankara. And there will also be tensions on foreign policy, particularly given that Erdogan may be tempted to take an increasingly assertive stance as the next election approaches, to consolidate his base and to try to split the opposition. It is easy to imagine fresh tensions in the Aegean and the eastern Mediterranean. Ankara has halted its naval exploration activities for now, but it has not dropped its claims, and could resume exploration at any time. Disputes over airspace with Greece remain an issue and have flared up in recent months.

Turkey’s efforts to advance a two-state solution in Cyprus, with a separate state for Turkish Cypriots, will also continue to be contentious: Europeans and the US see this policy as undermining the UN-endorsed notion of a ‘bizonal bicommunal federation’. Furthermore, Turkey’s military operations in Iraq, Libya and Syria will continue to cause friction with many EU countries and often also with the US. Finally, Turkey’s relationship with Russia is likely to cause growing tension. The more the Western sanctions regime on Russia tightens, the more attention is likely to turn to Turkey’s economic and political ties to Moscow. The US could put significant pressure on Ankara to align with Western sanctions, or impose secondary sanctions, which would add to Turkey’s economic difficulties.

As the next Turkish election approaches, the question facing Western policymakers is whether tensions with Turkey are rooted in the specificities of Erdogan’s government or are more deeply entrenched. If the opposition alliance wins the next election and strengthens rights and freedoms, as it says it wants to, there will be fewer tensions with Europe and the US over the state of Turkish democracy. This could inject positive momentum in relations between Turkey and its Western allies. But Western policymakers should not assume that the tensions would disappear. Turkey’s stance on issues like Cyprus or disputes with Greece would be unlikely to change much. And public opinion polls suggest that distrust towards the West is widespread in Turkey. A survey for the German Marshall Fund in April found that 58 per cent of Turks see the US as “the biggest threat to Turkey’s national interests”. Opinion towards Europe is similarly negative, with 70 per cent of Turks thinking that “Europe has assisted strengthening of separationist organisations such as PKK”. It won’t be easy for Western leaders to change these perceptions. But so long as public opinion remains unfriendly to the West, NATO’s political cohesion will be at risk.

*Luigi Scazzieri is a Senior Research Fellow at the Centre for European Reform. The piece is reposted on the blog of the Cyprus Economic Society from the CER website and after author permission https://www.cer.eu/insights/turbulence-ahead-turkey-and-west