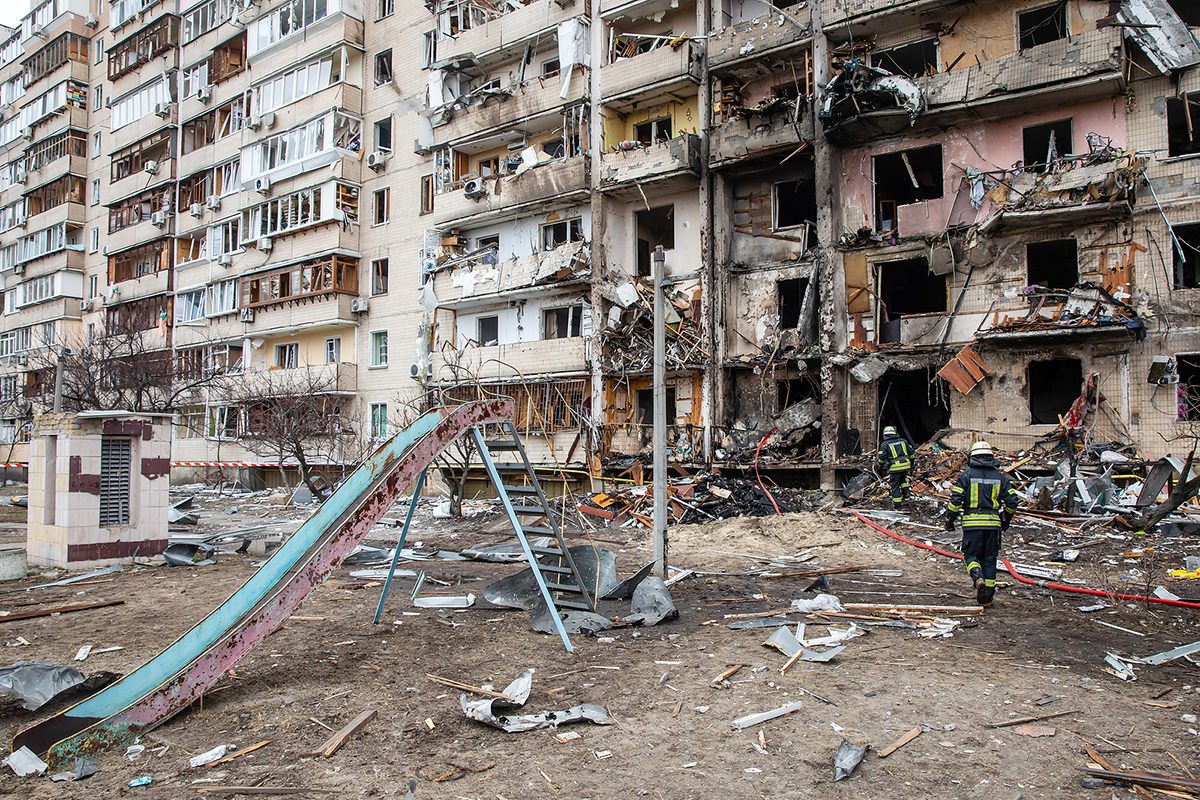 The world’s priority is to end the war. However, when a permanent member of the UN Security Council invades a country, there is more at stake than immediate destruction. If the protector becomes the aggressor, what will peace look like the day after?

According to the United Nations, as of 29 March 2022, there have been 3,039 civilian casualties in Ukraine: 1,179 deaths and 1,860 wounded. The real figures are probably higher as fighting continues.

The UN Refugee Agency (UNHCR) estimates that more than 10 million people have been displaced and 4.2 million have fled the country. About half of those who have fled are children and 80% of the adults are women.

With physical capital being destroyed and people fleeing, the IMF estimates that the Ukrainian economy could shrink between 25 and 35% this year.

Then there is Russia. Political scientist Ilya Matveev describes how this war will destroy 30 years of economic development. At a recent Bruegel event, economist Sergey Guriev explains how this will not be recovered soon or easily, as economic and political relations are now severely damaged.

The European Union, as Russia’s closest neighbour, is naturally affected. The vast majority of refugees have fled to EU member states While the exact cost is difficult to estimate, we know that these member states will have to bear a substantial amount of this.

However, the total economic cost to the EU is contained. Latest numbers from the ECB show that while inflation this year will be high in the euro area (5.1% and up to 7.1% in an adverse scenario), economic activity will increase slower than originally thought by 3.7% (or 2.3% in an adverse scenario). The same is true of the US which in any case has much weaker ties with Russia.

But the containment of the economic cost masks the fact that since 24 February the world has become a more dangerous place.

Although a peace project itself, the EU is now investing in military capacity in order to have “a credible deterrent”. Countries like Finland and Denmark, that have not been able or willing to take sides historically, are quickly rethinking their alignment.

At the same time, the retaliation of a number of countries has rightly focused on sanctions with the intention of destroying the Russian economy. And while economic warfare may not kill people, it kills livelihoods. Raghuram Rajan worries that their impact maybe similarly devastating and in any case “the lack of norms governing them, could result in their overuse.”

An increasing rift between ‘friendly’ and ‘unfriendly’ countries is emerging: the world is trapped in the logic of escalation. As we struggle to find ways of ending the war, we must think of what peace will look like.

The EU faces grave dilemmas. Despite unprecedented sanctions , it continues to pay Russia three quarter of a billion euros per day to buy energy. In an economically integrated world, sanctions not only harm the ‘enemy’ but cause severe self-harm. The EU therefore finds itself unwilling to apply an immediate energy ban, necessary to accelerate the draining of Russia’s war-chest. Instead, it has put forward plans to reduce the gas dependence from Russia by 2/3 by the end of the year.

The EU’s unwillingness to ban energy imports could imply that it does not decouple from Russian energy fast enough to help end the war, but plans to decouple by the end of the year might also be too fast for Russia to adapt.

How will Russia emerge from the war? No doubt she will have to pay for the destruction of lives and property in Ukraine and be accountable to international courts. Losing the EU as main energy export destination will leave Russia deprived of significant income. Will an impoverished Russia be a source of further instability in the future?

The EU must ban energy imports from Russia in order to end the cruelty of war. And it must do so now. But at the same time, it must think about how to reconstruct a dilapidated neighbour and recognise that it must bear some of the costs of peace.

The international community for its part will have to restart the long process of de-escalation in order to preserve that peace. We have a long climb ahead.